About the Founder of 798district.com

Martin Flynn has been an avid explorer since childhood and has been involved with art and artists since his maturity.

This early immersion in the art world, together with his urge to discover and collect (two of the driving forces in Martin Flynn's life) brought him to painting in the early 80's: when he explored America.

America had always been a dream destination for him and hollywood, his fantasy world. His discovery of the United States was definitely the decisive outburst of his artistic career.

Upon his arrival, he was extremely fascinated with the fact that American culture is outside standard history and traditional, European academic culture. Unlike many societies, Americans were able to invent their culture unfettered by the weight of centuries-old tradtions. Martin Flynn was fully attracted by this new broad-minded vision, being himself so anti-academic and having a perverse sort of antagonism towards any form of restraining systematization.

His fascination was such, that he decided to reinvent himself and subsequently, make his personal debut in the artistic world. His approach was rather improvisatorial and intuitive. Because he is working in the art business, he chooses to take a pseudonym, partly to avoid any prejudice towards his desire to create, and partly to perserve his anonymity.

He decided to walk across the United States and photograph it inch by inch... He settled for some time in New York, followed by L.A. Los Angeles as an enviroment as well as the values of the entertainment industry will shape Flynn's sensibilty. He began to project his life into a sort of prototypical American experience, where vision is "paramount".

" Choosing subjects is definitley an emotional process. My compostions are the result of my discoveries. "

Although his work depict prearranged still-life objects, it is dificult to term Martin Flynn a still-life painter. His compositions are rounded, sculptured, and dimensional, breaking the picture plane.

If at first, America appeared to Flynn as a land of incomparable plenty, he then realised the tension existing between what we have who we are, a tension which propels us on a high-flying illusory trajectory; This will augure a new approach to Flynn's works.

The first phase of the artist's painting was resumed by Flynn with the following words :

" We reflect our personalities by the objects we surround ourselves with, by the objects we worship - a narcissistic reflexion of our own importance in accordance with our individual choices. I became aware of this by "côtoyer" Hollywood and its star-system. In painting these objects, I am trying to chronicle the visual icons of our time and to record the phenomena of their social importance. It isn't the reflective quality of chrome as a painting problem that interested me anymore - but rather the evidence that people need a certain amount of "chrome" in their lives, in a figurative sence, in order to see themselves. Perhaps to remind them that they do, in fact, exist."

Despite this, however, he doesn't consider himself a social painter at the time :

"I want to show, not tell. When I arrived in America and found myself totally amazed by these objects, later, I thought this "object-worship" phenomenon was curious, so I paint about it!"

Similary, Flynn then began to employ popular Hollywood myths, seeing in them reflections of the myth of modern American fiction and of our own media-generated identities. His works reflect his attachment to the movie world. He compares himself to a filmmaker without a camera, continuously observing and making visual situations in his head, but with only one frame per movie (the resulting painting). He capsulizes a concentrated moment on canvas.

Using a camera instead of a sketch pad, the use of photography has long been an essential device for Flynn's melding of imagery. Photographic images appear as appropriations from mass-media publications, as found photographs, or as the artist's personal photographs and snapshots.

His selective process functions on two levels: the gathering of images on his travels, cuttings and collections of everyday life. His seemingly haphazard arrangements and juxtapositions show, in a cinematical way the simultaneities of visual experience and suggest the artist's personal narrative content.

Martin Flynn is an artist in constant motion. A peripathetic traveller, animated explorer, and a man of rapid-fire thought process, Flynn possesses a mind and hand that race from one challenge to another.

The artist exercises an intuitive sence of the natural history of his own work.

Flynn spends weeks, sometimes months, assembling still-life compositions and photographing them. Often by the time one body of work enters into critical acceptance, Flynn has shifted direction and a new work appears. While working on a particular painting, Flynn is continuously creating, changing and disposing of hundreds of other artworks in his mind (of which a few will actually see the light). 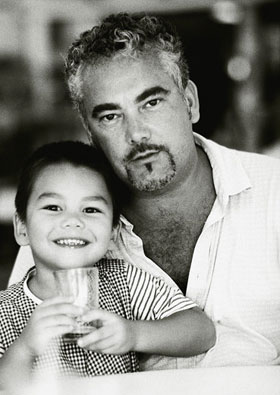 The merging artwork may become so obsessive, this leads him sometimes to work on several paintings at a time.

His work exists in the gap between past and present, ordinary and extraordinary. He disconnects and rearranges in such a way that time becomes rather associative than chronological.

In the mid 90s, an impotant shift of subject matter occured. The artist's emphasis shifted from the "All American Dream" centricity of his images to a more international viewpoint.

In his latest works, Flynn conveys a personalized repertory of globally acquired street-level recollections, emphasizing the casual and the common, quietly observed and analyzed. The artist, like a striding pedestrian everyman, infuses the common scene and ordinary occurrence with his touch of magic. The artist expresses the "turmoil of emotions" through a multiplicity of images and their somewhat surprising dispostion in the works.

Flynn's vision has invariably evinced optimism, hope and humour; yet it also sustains serious insight into the human condition. He has gained a more universal consciousness.

798district.com is the world platform for art lovers and smart people.

798 Art District Limited offers a truly unique experience to explore the world of Art, through a dedicated team of experienced art dealers who can help source works from emerging to iconic artists on the primary and secondary markets.

798district.com is connection between the Eastern and Western art communities with all information concerning: