About the 798 Art district

798 Art District is located in the Dashanzi area, to the northeast of central Beijing. It is the site of state-owned factories including Factory 798, which originally produced electronics.

Beginning in 2002, artists and cultural organizations began to divide, rent out, and re-make the factory spaces, gradually developing them into galleries, art centers, artists' studios, design companies, restaurants, and bars.

It became a "Soho-esque" area of international character, replete with "loft living," attracting attention from all around.

Bringing together contemporary art, architecture, and culture with a historically interesting location and an urban lifestyle, "798" has evolved into a cultural concept, of interest to experts and normal folk alike, influential on our concepts of both urban culture and living space.

798 stands for much more than a three digit number: in Beijing these numbers symbolize the country's cutting edge art movement led by the Chinese vanguard, unchained artistic personalities with alternative life goals. The largest, most influential art district in China - the 798 - hosts world-class international and Chinese exhibitions in the midst of former weapons factories.

The number of visitors to the 798 Art District reached as high as 75 million. 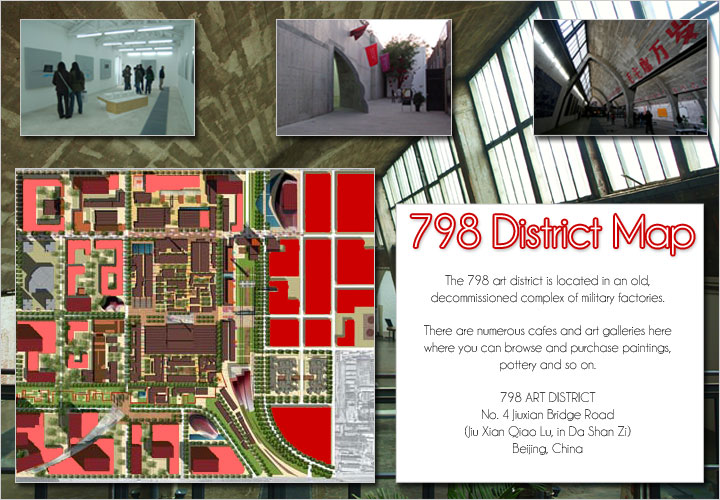